Posted by Jerrard Romanoff in Guides, on March 6, 2015

Well that is a bit of a letdown. A recent long investigative piece published by the Independent states that the property boom in London which was considered to be great news by owners, real estate agents and professional movers in the capital alike, was actually not such a great news after all. The reason – the increase in the sales of properties was not a result of ordinary everyday people, who have worked hard in order to get a new home, moving in or across the City, but rather because purchases of high-end houses and apartments was an easy way for members of organizsed crime circles to launder their money.

The scheme is simple. Billions of  dirty pounds have been invested in purchases of expensive properties across the territory of the metropolis, using anonymous offshore front companies. We are not talking about only British criminals, but also big fishes in the world-wide criminal scene.

The statistics are quite shocking actually. The number of such illicit purchases that are proven up to this moment is the astonishing 36 342 houses and apartments in London. The result affected the entire property market in the capital actually, causing the average price per a square meter of real estate in the city to skyrocket. Everybody was talking about stabilization of the economy and that it was a clear sign of coming out of the big financial crisis that had its grip on the world economy in the past several years. Well, it turns out it was a false alarm. 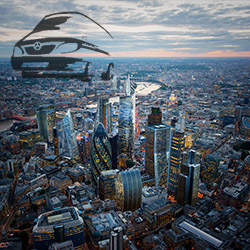 According to the information released by the Metropolitan Police Proceeds of Corruption Unit, up to 75 percent of the properties owned by people connected to organized crime are owned via offshore companies, which means that London has become a sort of a center for illegal money laundry in the world. There is an internal logic in this, because traditionally the prices of houses and apartments here are high, which means that more money can be laundered by a single purchase. And let’s face it – who does not like the idea of moving into a luxury property in the heart of London at any time, even mafia bosses?

This wide-stretching fraud has been made possible by certain cracks in Britain’s legislation. The thing is that it is pretty easy for an anonymous off-shore company located in some remote place, like the Virgin Islands, to purchase a property in London without the need to disclose the identity of the buyer himself. On the other hand, real estate agents are obliged by law to run money laundry checks only on the sellers of the properties in question. Thus, it looks like a win-win situation for everyone, except the ordinary tax-payer who expects justice to be sought and actually suffers the most from this artificial “stabilization” in the market, which leads only to increase in prices, but not in salaries, or job-opportunities. Fortunately, the vicious circle was broken and hopefully the people responsible will have to face justice and pay for their crimes.