Largest House in UK to Be Sold

Posted by Jerrard Romanoff in Guides, on January 23, 2015

Apparently, the largest residential property in the United Kingdom is not as expensive as many other smaller houses in trendy places around the country. At the moment, the biggest house in the UK is Wentworth Woodhouse in the village of Wentworth, South Yorkshire, England. Wentworth Woodhouse is a Grade I listed country house of enormous proportions. If wondering how big the place actually is, consider that there will be a small army of man and van people needed if one was to move in or out of the house.

Wentworth Woodhouse’s east front measures at hundred and eighty metres in length making it the longest country house façade in Europe. Being the largest privately owned house in the UK, Wentworth Woodhouse has twenty three thousand square metres of floor space, adding up to three hundred and sixty five usable rooms – one for each day of the year (man and van people would need the floorplans when moving stuff in!). The house occupies one hectare of Earth’s surface and has its own seventy three hectare park. The entire property itself (structures & land) totals sixty one hundred hectares.

Originally, the place was a Jacobean house of relatively normal (for manor house) proportions. It was constructed in the seventeen hundreds by Thomas Watson-Wentworth, 1st Marquees of Rockingham. Later on it was his son who took on the epic construction legacy and built much of what the house is today. The original structure eventually ended up being just a wing of the overall house structure. 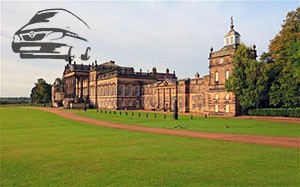 Apparently when the house was finished it was so big that guests were actually given baskets of confetti to scatter as trail to their room when going to it at the end of the evening. In its heyday, Wentworth Woodhouse was at the peak of English aristocratism. With Gatsby-like parties thrown day and night, the house was a symbol of industrial revolution wealth in large proportions.

The second last owner of the mansion died in a plane crash in nineteen forty eight, apparently he was flying to meet JFK’s sister Kathleen ‘Kick’ Kennedy. Shortly before the year two thousand, the house was bought by its current owners. They intended to restore the mansion to its former glory though this proved too tall of an order. After spending years on the task, the current owners have decided to pitch the place for sale, asking for the mere sum of seven million pounds – peanuts compared to what other places are changing hands for in the UK at the moment. Some say the price is actually elven point one million pounds not seven, still though this isn’t the cosmic sum one expects to hear.

The catch with Wentworth Woodhouse (and that’s no secret) is that the place needs an estimated forty two million pounds in restoration and renovation, at least to bring it back to its former glory. Whoever takes on the challenge of owning and restoring one such property will definitely have their hands full, others however simply view the place as a bottomless money pit.