Posted by Jerrard Romanoff in Guides, on February 2, 2015

On the southwestern tip of the English mainland is located an area known as Land’s End. It is at this place that England meets the Atlantic Ocean. Land’s End was once known as the Kingdom of Kernow. Today the area is a county of Cornwall and is one of the England’s touristy hot spots.

Many described Land’s End as a timeless place with amazing landscape and seascape vistas that always leave people breathless and speechless. The area has a rich heritage in history and is considered by many to be one of England’s most beautiful rural areas. At one point in time the famous First-and-Last Inn was located in Land’s End. Today at the site of the once renowned inn stands a theme park that attracts both local and foreign visitors by the number.

The main and undoubtedly most awe-inspiring landmark of the area is St. Michael’s Mount. The mount is connected to the mainland via a cobbled pathway that gets covered by water during the high tide. St. Michael’s Mount was created in 1135 as a sister abbey to the world famous Mont, St-Michel that is situated in Normandy, France. The top of the mount is 250 feet above sea level and even though the climb is laborious, it is well worth as it provide amazing views of the mainland and Atlantic Ocean.

Nearby St. Michael’s Mount is situated the town of Penzance which is the westernmost town in England. The town is often used as a based from travelers who have come to this part of Land’s End. The most renowned hotel of the town is the Abbey Hotel which was created by 1960s prominent supermodel Jean Shrimpton. The most famous public house of the town is the Turk’s Head. The pub is located in the heart of the town and dated back to the 16th century. The Turk’s Head just like most parts of Old Penzance was damaged during the Spanish Invasion of 1595. Today none of the damages can be seen and the two just like the pub is thriving. 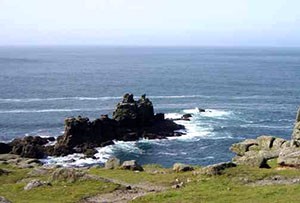 The town of Penzance has regular ferries that the course between the town and the popular Isles of Scilly. The Isles of Scilly are comprised by over 100 uninhabited rocky islands that are known for their unspoiled beaches, exotic plants and rare species of birds. The most famous landmark within the Isle of Scilly is the remarkable Tresco Gardens.

The town of St. Ives is another place in Land’s End that is well worth a visit. So make sure that you pass by it while you are exploring the area.