Parallel with the development of British commercial aviation, the nation’s airports and aviation infrastructure such as radars, aircraft service complexes etc. also developed. The busier the sky got, the more places people wanted to get to by plane. Gradually more and more airports were built in cities and regional centres across Great Britain. Some airports are privately run, others belong to the state. Airports usually vary in size and capacity. Smaller airports are mostly equipped to accommodate smaller, regional to mid-range aircraft. Larger airports usually feature longer runways able to accommodate bigger aircraft doing trans-ocean/intercontinental flights. The largest and busiest airport in the United Kingdom is London’s Heathrow International Airport, located in the West London borough of Hillingdon.

At the moment, London’s Heathrow International is the largest and busiest airport in Great Britain, it is also the busiest in Europe in terms of passenger traffic, and the sixth largest in the world by the criteria. In 2015 alone, Heathrow processed seventy five million passengers (2.2% more than 2014). Heathrow International is the primary hub of British Airways and the main operating base of Virgin Atlantic.

Where is Heathrow International situated? 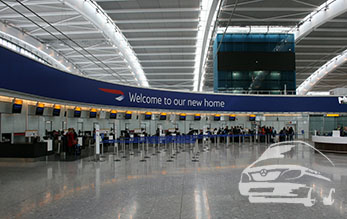 The airport is located 22km or 14miles west of Central London, near the western boundary of Greater London. The Heathrow complex is within the London Borough of Hillingdon (other areas within the borough are Cowley, South Ruislip, Yiewsley etc.) on a strip of land which is designated as Metropolitan Green Belt. Being situated in a suburban region, the airport is surrounded by a number of areas, including Harmondsworth and Longford. Because the airport’s runways are going from east to west, most of the aircraft use a landing approach angle and direction which puts them right over surrounding suburbs. This is also necessary to catch favourable winds and avoid bad winds at landing and take-off. Heathrow is one of two airports to be located within Greater London, the other one is City Airport.

How did Heathrow begin?

The airport began as a small airstrip for local and regional uses, in 1929. Back then the facility was called Great West Aerodrome. The complex was within the London hamlet of Heathrow, which is how the airport got its name. At that time, Heathrow was not really a suburb as the majority of land there was occupied by farms, market gardens, orchards etc. The hamlet had two or three manor houses, with Heathrow Farm being where Terminal 1 stand today.

Building of the actual Heathrow Airport began in 1944. The original intent was for the new facility to be used by long range military planes coming and going to the Far East. By the time the main airstrip was completed and basic infrastructure was in place though, the WWII had ended. Nevertheless, the government did not freeze the project but continued construction for civilian purposes. In 1946 the complex was finished and officially opened for public use under the name London Airport. Twenty years later in 1966, the airfield was renamed to Heathrow International Airport – its name to this day. Much of the original layout & infrastructure, including control tower, central area buildings, terminals etc. was designed Sir Frederick Gibberd.

Heathrow is a large, constantly busy airport. Currently it is used by more than eighty airlines, flying to nearly two hundred destinations in eighty four countries, worldwide. As mentioned earlier British Airways and Virgin Atlantic use Heathrow Airport as the primary hub of operations. The airport consists of five terminals – four of them passenger, one cargo. The airport is mostly used by international travellers – 93% of all passenger traffic is international, the rest is domestic. As busy as it is, Heathrow cannot still surpass New York’s JFK International.

Originally Heathrow had six runways arranged in a hexagonal shape. In the early days when planes were smaller, lighter and less powerful those six runways proved sufficient. However as aircraft got larger and heavier, regulations changed so runways had to get longer and stronger. In result, Heathrow redeveloped much of the runway infrastructure and today there are only two large runways in operation. The remainder of the original hexagonal layout can still be seen from the air today, though the old runways are now taxiways.

The airport has its own ‘gate guardian’. Gate Guardians are usually a retired piece of aviation equipment, placed in a special spot to commemorate a plane’s history and career). In the case of Heathrow International, the guardian is located at the entrance to the access tunnels (near the large car parks).  The former gate guard of Heathrow Airport was a scaled model of a BA Concorde. The current gate guardian is an Emirates Airbus A380, on display there since 2008.

Heathrow also provides facilities other than those needed by aircraft, such as a multi faith chapel, where Christian Orthodox, Muslim, Jewish, Anglican, Catholic, Hindu, Sikh and Free Church chaplains hold prayers a number of times a day. The airport has its own media unit too, consisting of six photographers and one TV crew, who are serving all major newspapers and television stations around the world.

Heathrow Airport is a large airfield, occupying a decent bit of land so naturally the complex has its own internal road system. The roads within the airport are coded according to their location. Roads in the north of the airfield are marked N (Newall Rd), E in the east (Elmdon Rd), S in the south (Stratford Rd), W in the west (Walrus Rd) and C for the centre (Camborne Rd).

Being situated in London’s Metropolitan Green Belt, the airport has to maintain certain environmental standards and construction development regulations. Hillingdon borough is one of the greener regions of the capital and maintains over 200 parks and green open spaces scattered in all suburbs of the borough such as Ickenham, West Drayton, Eastcote and many others. The total amount of land occupied by parks and green open spaces in Hillingdon is 730 hectares. Harmondsworth Park, one of the popular places in the borough is managed by British Airways, on behalf of the borough council.

NG Video on Heathrow Airport (prior to Terminal 5)