Five continental European cities to work and live in

You have decided to change your surroundings and leave Britain to relocate to continent Europe. However, you cannot choose a destination because there are so many cities that are appealing with their beauty, unique life style and professional opportunities. Therefore, here are several cities that you should definitely top your list.

The capital of the Czech Republic is one of the most beautiful cities not only in Europe but also in the world as a whole. Prague has an amazing bohemian atmosphere that will make you fall in love with the city almost instantly. It has one of the lower unemployment rates in the European Union but the downside is that the city lacks of job diversity. Prague is also credited for maintaining the best public transportation network on Earth, which ultimate means that you won’t have a hard time navigating through the city.

Berlin is unequivocally one of the most interesting cities in Europe. It has an impressive cultural and artistic background, which attracts people from all four corners of the globe. The German capital is renowned for its affordable living standards and above-average monthly wages. Berlin is constantly growing and offers to its inhabitants amazing career opportunities. Statistical surveys predict that an estimate of 100.000 new jobs will be available in the city by 2020. 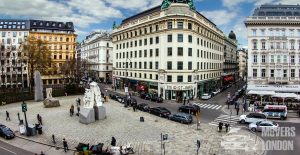 Ranked the best city in world it isn’t a surprise that the Austrian capital is a city that you must strongly consider. Vienna has one of the lowest crime rates in the European Union and one of the best urban infrastructures on the continent. It is also one of the most visited cities on the planet as it is the location of numerous internationally known landmarks such as:

The Austrian capital offer an abundance of employment possibilities to both German speakers and non-German speakers as the city is home to the headquarters of numerous international companies and organisation, including the United Nations.

Copenhagen is pedestrian and cycle-friendly city that has a unique ambiance. The Danish capital is home to some of the finest restaurants and coffee shops in Europe. It is also one of the prettiest cities in Scandinavia a fact that is proven by the numerous tourists that visited Copenhagen yearly. Renowned for its eco-friendly policies, ecological studies estimated that by 2025, the city would reduce its carbon emission to 0%. It is one of the most expensive urban areas on the planet and has highly elevated social taxes. However, it also offers some of the highest average salaries in the European Union. You can easily relocate to the Danish capital by using the reasonably priced London to EU moving services of Movers London.

Zürich is the artistic and economic heart of Switzerland. It is the largest urban area in the country and about 30% of its residents are foreigners, which only attests to its high living standards and amazing career possibilities. Researches show that local inhabitants have the best purchasing power in the world as they receive the highest average wages on Earth.