Ally Pally – Back in Business

Posted by Jerrard Romanoff in Guides, on February 18, 2015

One of London’s best known places of interest – Alexandra Palace, affectionately known as Ally Pally has long been due for restoration. The aging landmark, dubbed the People’s Palace was the site of the first ever BBC television broadcast back in nineteen thirty six. A recent proposal to invest nearly thirty million pounds into renovating and restoring certain parts of the structure has been approved by the Haringey Local Council responsible for maintaining the structure.

The main goal of the restoration project is to turn Alexandra Palace into a popular tourist attraction for everyone to enjoy. The focus of the restoration is set on the eastern side of the Palace where the former theatre and television studios are. Eventually, the studio and the theatre should be back in use. Local council’s approval of the restoration project comes with the intent to ‘preserve the landmark for generations to come’. As always there are critics too who say the planned restoration would ‘destroy the essence of the Muswell Hill landmark’ – only time will tell whether or not that’s a valid concern.

Up until the council approval of the twenty eight million pound restoration budget, there were sixteen million pounds raised through Heritage Lottery Funding. All in all, this makes for a healthy sum which should make a notable difference in the building’s appearance and lifespan. According to local council members, Alexandra Palace has become a very popular venue in recent years and more people are flocking for a tour of Ally Pally than ever before. However, certain portions of the building are in a serious state of decay which calls for immediate measures to be taken in restoring and preserving the structure.

Council also says that opening the historic BBC television studios along with the grand Victorian theatre will teach people of the rich heritage and colourful history behind Alexandra Palace. Obviously this would also secure the future of Haringey’s most iconic local landmark. The restoration project doesn’t solely focus on the eastern side of the Palace, but also on the colonnades on its southern side. It is also planned to improve transport connections and accessibility to and from the building. 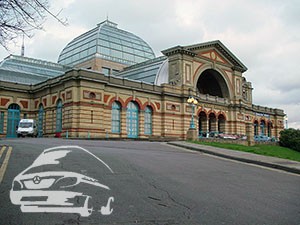 The first time Alexandra Palace opened doors was in eighteen seventy three. Fifty years later in nineteen sixty three, the BBC launched the first ever regular television broadcast from the Palace – making it all the more iconic and worth preserving. Plans for the studios include construction of a special interactive learning centre where visitors can find out about memorable moments in the British Broadcasting Company’s history. The learning centre will be complemented by a gallery space where broadcasting and television exhibits will be on display. Perhaps one concern with this otherwise great restoration plan is that visitors would like to see the actual studios where television magic was made, rather than the interactive displays, illuminated showcases etc.

Despite concerns and criticism, the overall opinion is that the restoration of Ally Pally should go through in order to reinstate this iconic building.